The popular first person shooter video game Titanfall 2 is said to have a serious security flaw that has been exploited.

Reports of the game’s hacking began circulating on Twitter after members of the Titanfall 2 community, including Leon Benkovic, urged players to uninstall the game:

Several members of the Titanfall 2 community including @DirectXeon report that Titanfall 2 is currently massively compromised.

If you own Titanfall 2 on PC, * DO * NOT * start the game. For now, uninstall it until a fix is ​​released. pic.twitter.com/lNZGbufOL1

Until further information is disclosed and the reported vulnerability has been resolved, community members suggest removing the game as protection.

Respawn considers it a “simple exploit”

“We are aware of reports of a security vulnerability in Titanfall 2 and are investigating them. We don’t have any other information to share right now, but will update as soon as we do, ”Respawn said a few hours ago. The latest update from the game developer at the time of writing suggests “that we are dealing with a simple exploit that can crash games”.

An update: we are still investigating this issue, but our engineers believe we are dealing with a simple exploit that can be used to crash games.

We don’t think there are any more serious risks to affected players or their machines.

We’ll update again as soon as we learn more.

Therefore, Respawn does not believe that the exploit poses any serious risk to affected players and their machines and is continuing its investigation.

Hack me twice, shame on me!

Titanfall 2, developed by Respawn Entertainment and published by Electronic Arts (EA), is a sequel to the Titanfall game from 2014. In the video game, which is set in a science fiction universe, the player is endowed with various skills and controls “titans”, mecha-style exoskeletons and their pilots. However, this is not the first time the video game maker has tackled reports of hacking attacks.

Both Titanfall and Apex Legends, also developed by Respawn, saw a number of attacks from gaming fans and opponents alike earlier this year. In July of this year, Apex Legends was hacked by Titanfall fans to pressure the game developer to revive a canceled Titanfall spin-off. Previously, in May, both Titanfall and Titanfall 2 battled a series of DDoS attacks that resulted in attackers blacklisting many players so they could not join the game. And again, pre-May DDoS attacks have been an ongoing problem for Titanfall in recent years.

A user shared a screenshot from a Discord chat that hypothesized this issue: 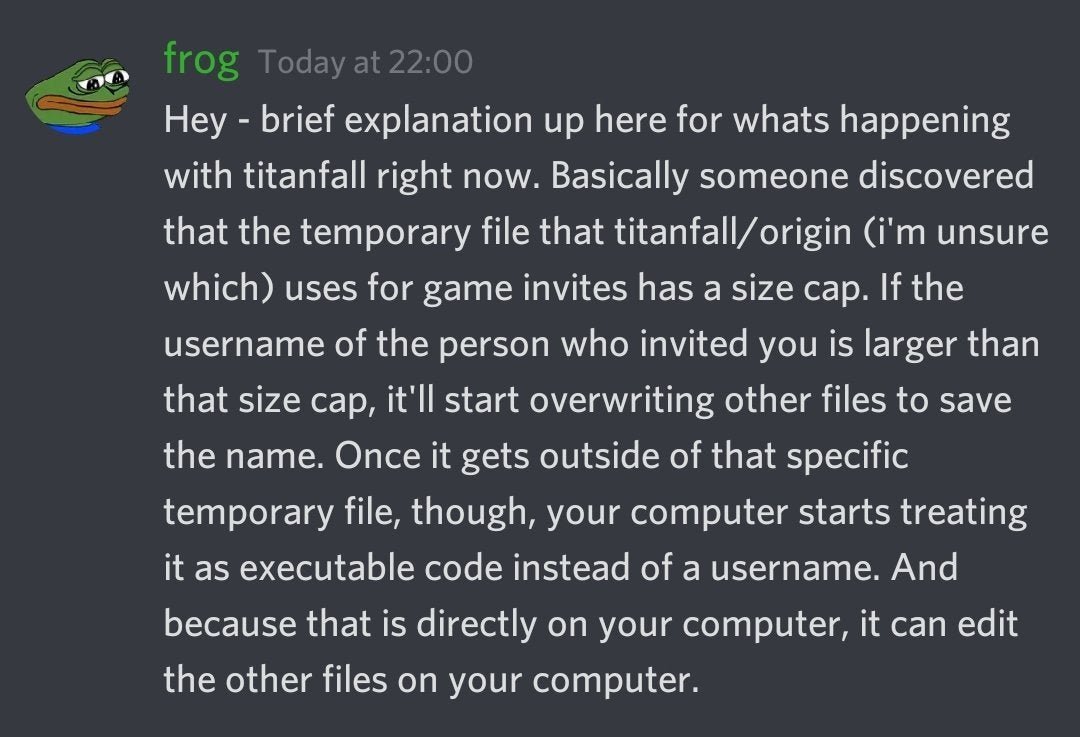 However, one Reddit user warned everyone not to jump to conclusions as there is no concrete evidence that Titanfall 2 was hacked.

“You all panicked over a tweet of a screenshot of a Discord post claiming that there is a zero-day multi-platform [Remote Code Execution (RCE)] in a moderately popular game, “Redditor told Scalyblue.

“This claim comes, with no evidence, with very questionable details (an RCE that writes to a random memory that is present in all implementations of the game? Yes. Sure.) By parties who are neither established security researchers nor members of the development team.” “

“I repeat. There is no POC, there is no evidence, no white paper, no nothing.

Ars has reached out to both EA and Respawn with specific questions and is waiting for their response. We are monitoring developments around this topic and will update this story as new information emerges.

Getty Images By now, most people know that hackers tied to the…