According to the research firm’s numbers released today, consumer sales fell 6.8 percent. A deficit in parts such as integrated circuits for power management and radio frequency has adversely affected smartphone production worldwide.

The analyst added that the production schedules of “basic and utility” phones are more affected by supply bottlenecks than those of “premium” phones. As a result, sales of premium smartphones actually increased during this period, even though smartphone sales declined overall.

Samsung at the top

Still, there were limited options for buyers, Gartner noted. Samsung finally won the largest market share (20.2 percent) thanks to its foldable smartphones.

Apple’s quarterly market share (14.2 percent) was helped by new features in its iPhones, namely the A15 processor, as well as improvements in battery life and camera sensor. Gartner also indicated interest in 5G. 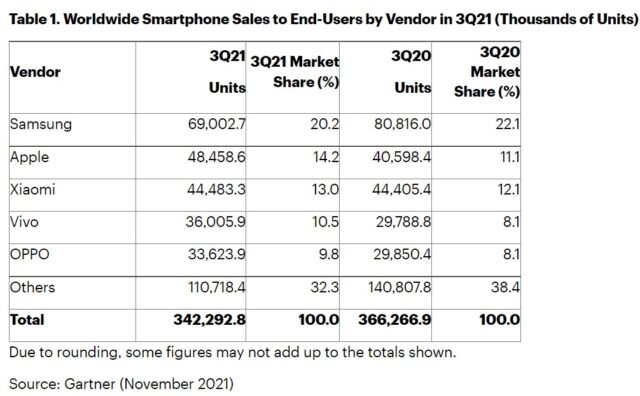 Smartphones aren’t the only technology that still suffers from a lack of components. Analysts believe that PCs will be hard to find this holiday season due to supply chain issues. According to reports, the market also declined in the US in the third quarter of 2021 compared to the third quarter of 2020. And the demand for Chromebooks has fallen sharply as people return to personal study and work.

In May, Gartner predicted that the global chip crisis would end by the second quarter of 2022. However, while equipment is expected to be more readily available by this time, the research firm noted that “substrate capacity constraints could potentially extend into the fourth quarter of 2022”.

With WhatsApp now you can create your personal stickers

When we think of subscriptions, we usually think of services like your…

Many have been wondering when Apple might refresh its AirPods earphones. According…